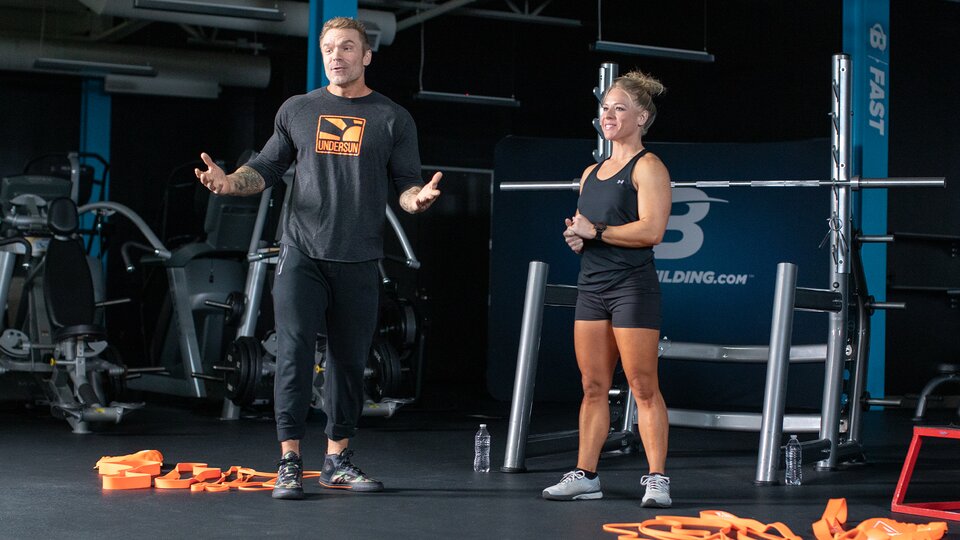 Working out is not as complicated as we often make it. Even when you’re training with a different tool, the movements are familiar. That’s the philosophy of James Grage, owner of Undersun Fitness, who joined Rachel Pyron, Strongwoman competitor and former Bodybuilding.com employee, in the Bodybuilding.com gym to show you a brand-new leg workout you can do using nothing but bands.

“I say that my goal is to show even the most hardcore gym rats that no matter what your goal is, bands are an effective training tool,” says Grage. “But my real goal is to be able to help the average person squeeze that workout into their lifestyle and make fitness attainable.”

People think they can’t get enough resistance out of bands, but Grage has been working out exclusively with bands for years. In this workout, he’ll show you how to target and isolate the glutes and hamstrings, the glute-ham tie in, and the quads. You’ll learn how to vary the exercise to target the areas that need the most work, achieve different resistance levels with just one band, and create the kind of resistance you need to hit your goals.

Get into a split-squat stance, with a 90-degree bend in the front and back knees, and anchor the band under the arch of your front foot. If you put the band under your toe, you’ll unweight that part of the foot when you pull up and lose your balance. Reach down and grab each side of the band with your hands.

“The biggest mistake I see people make is not getting enough tension in the band at the beginning of the range of motion,” says Grage. “Grab the band low on either side of your ankle to create tension at the start of the movement.” 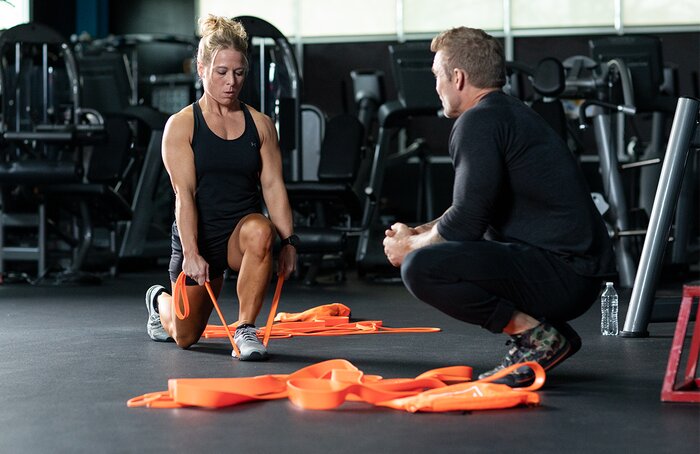 To target the hamstrings, push back through your heel as you come up, as opposed to pressing through the toe and straight up, which will give you more quad activation. Working the quad is more about extending the knee, while extending through the hip targets the glutes and hamstrings. Grage recommends starting with a light band first to establish the mind-muscle connection and focusing on good contraction without worrying about the resistance.

For someone like Pyron who wants to concentrate on overall strength, one of the advantages of training with bands is that they offer varying planes of resistance, forcing every muscle in your body to stabilize while you move.

“I’m used to using free weights, where you don’t have tension the whole time,” explains Pyron. “This is definitely a different feeling, and it’s hard because it’s constant tension through the whole movement.”

Stand with your feet slightly wider than shoulder width and anchor the band the same way you did for the split squat, under the arches of your feet. Hold the other end of the band in both hands and squat, bringing both hands up to hold the band in the front-racked position. From there, stand up, pressing the band overhead, and begin squatting with the band held overhead.

“One of the things I like about bands is I can load and unload to get into position,” says Grage. “Think about it: If I were going to do an overhead squat, I’d have to go to the squat rack, load up the bar, and hold it over my head as I get into position. With bands, I can squat down and get into position when there’s no tension on the band, then stand up to create the tension.”

Grage prefers 1-1/2 reps on this exercise, squatting all the way down first, coming only halfway up, squatting back down, and then standing back up.

“We have to use a bit of a different technique here to get that good contraction,” he explains. “Adding a little more volume with the extra half rep makes up for the lack of heavy tension that you can get with a bar.”

“What I like about using bands for a deadlift-style movement is that the weight is no longer out in front of us,” explains Grage. “The line of pull is centered along the body, which engages the quads more than a traditional deadlift.”

Stand on the center of the band with your feet hip-width apart and grab each end with your hands. If you want to give your grip a break, you can wrap your hands through so the ends of the band sit on the back of your wrists. 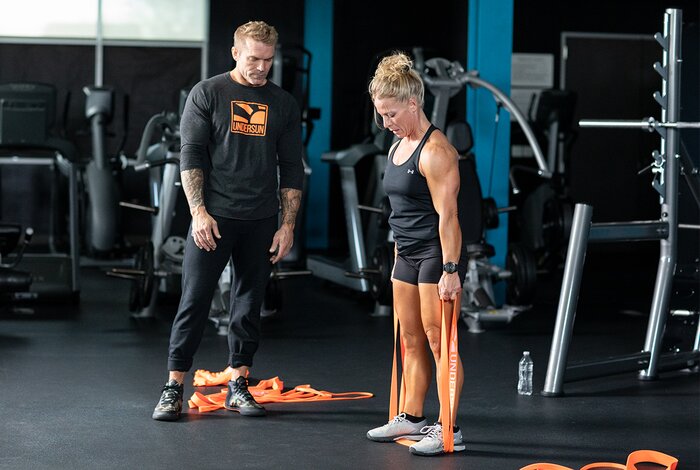 If you are used to pulling a lot of weight on deadlifts, there are two ways to go up in resistance, Grage says. You can either grab the band closer to the anchor point, or you can go up to a heavier band. Just for a reference, Pyron deadlifted 355 pounds with an axle bar at America’s Strongest Woman in 2019, so she is exceptionally strong, yet she found the heavy Undersun bands to be plenty challenging for this workout.

“I don’t normally sweat this much,” Pyron says.

This exercise focuses on the hamstrings and glutes and looks just like the bar version of stiff-legged deadlifts, but with the band anchored under your feet instead. Use the same setup as for the band deadlift and wrap your hands through the band to distribute the weight to your wrists. With your knees straight but not locked out and your back straight, push through your heels and extend through the hips to come up.

“Think of it like you’re stretching your hamstrings,” says Grage. “Keep your knees straight, keep your back straight, and go down until you feel that tension. Squeeze those glutes at the top and get that hip activation.”

Grage prefers lighter resistance and higher reps for isolation exercises to get a deep burn in the muscles. If you need to adjust the resistance without switching the band, simply widen your stance.

As Grage explains, there’s a bit of a learning curve when it comes to working with bands. You’ll find yourself making small adjustments with your legs and hands, which is what you can expect the first time you try something new.

“Bands do have advantages over free weights,” says Grage. “They offer resistance in multiple planes and constant tension all the way through. We’re all so used to going to the gym to get a great workout, but if I can do this at the beach or the park, why not?”

Bands are a portable and inexpensive piece of equipment that you can adapt to any style of training. Pick up your own set of Undersun bands here on Bodybuilding.com. For more great training ideas, or to test your limits with Grage and fellow band enthusiast David Morin, try the Undersun Band HIIT Workout.