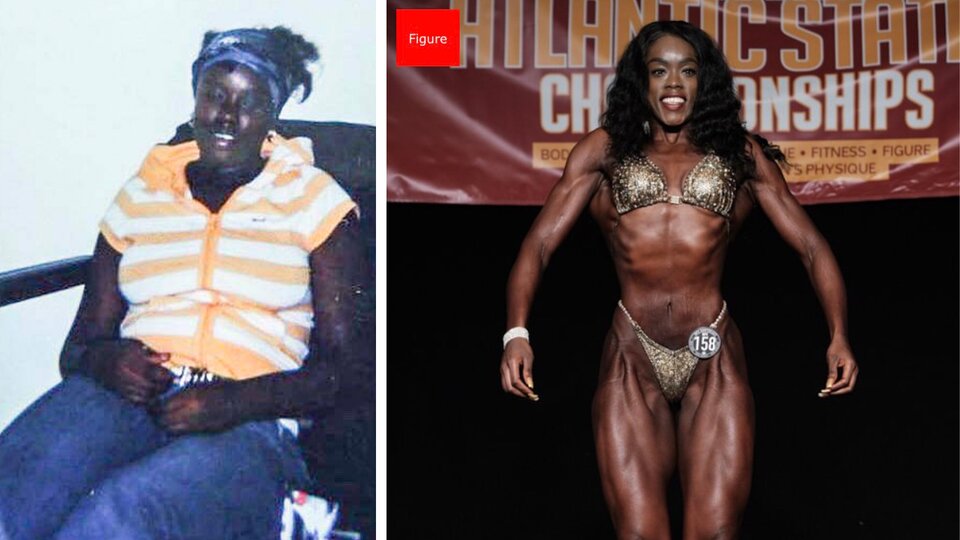 Starr Scott knows how hard change can be. She was bullied as a child, often being told she would never be good enough. Feeling depressed and insecure and not knowing how to cope, she turned to food to try to feel happy. Years of struggle with depression and binge eating followed.

By 2009, Starr weighed over 250 pounds. After the sudden loss of her mother, Starr realized she had to find a healthier outlet for her emotions—or risk having the same type of tragedy happen to her.

The past few years have been an incredible transformation for Starr, both mentally and physically. She lost the weight and overcame her fears of being judged and criticized by stepping onstage to compete in bodybuilding. She is open and honest about her struggles to help others with mental health and eating disorders realize they are not alone. Her mission is to help these same people see that anything is possible when you commit to making a change.

Before I started my transformation, I was basically just eating whatever, whenever. I’ve had depression for most of my life, and I was bullied a lot as a child. I was always told I was bad, or that I was always going to be ugly because of my skin complexion.

Over time I developed an eating disorder, binging on food as a way to cope. Anything could trigger me. If I had a disagreement at school or disagreed with my mother, I’d just eat to make myself feel happy. At least, at the time I thought I was making myself happy, but really it made it worse.

I started to pack on pounds as I got older and I didn’t like what I was looking at in the mirror. At the same time, I didn’t really know how to get help, so I just kept doing the things that made it even worse. I just kept eating and eating. It was getting out of control. 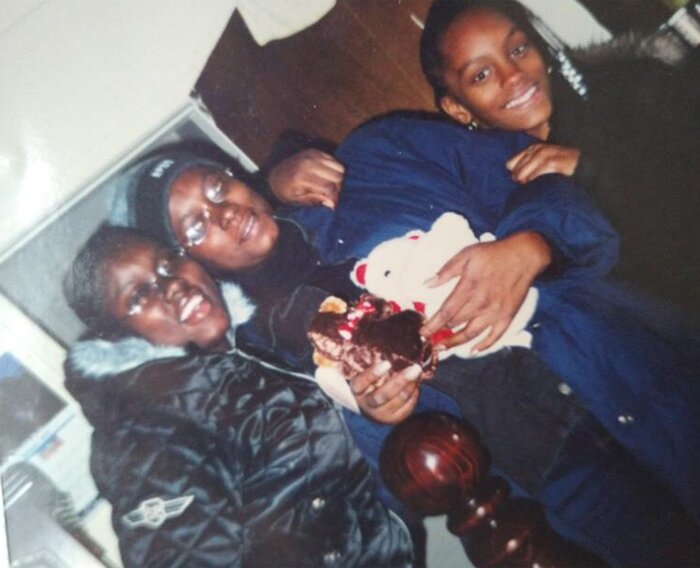 I Was Left to Fend for Myself

All of a sudden, my mother passed away in 2009. She’d had diabetes and was overweight. She didn’t pass away because she was overweight, but when she did pass, I was left to fend for myself.

Everything got worse. I was trying to cope with her death, so I just kept eating and eating. My depression got worse than ever.

One of my friends finally checked me into an out-patient facility so I could talk with someone to help with my struggles. As I got into counseling, my counselor suggested that I start trying to make healthy changes, such as going to the gym. So, I started to go to the gym. I joined Planet Fitness and I started going once a week.

Looking at My Journal, I Didn’t Like What I Was Seeing

At the same time, I started a journal and began writing down my thoughts, what I heard people saying to me, and what I thought about myself. I also wrote down what I ate.

Looking at my journal, I didn’t like what I was seeing. Not only was there a lot of negativity, there was a lot of fattening food. I’m from down south where everything is fried. All I know how to cook is things like fried chicken. So, I decided to start there.

At first, I became vegan, I looked up different recipes, and I started to learn how to cook healthy. Once I became vegan, the pounds dropped quicker. I had to make sure I was getting enough protein, so I’d have a protein shake and that helped me tremendously. I was only vegan for a year, but in that time I dropped about 50 pounds.

I was happy with the results, but I couldn’t maintain it. Being vegan gets pricey! 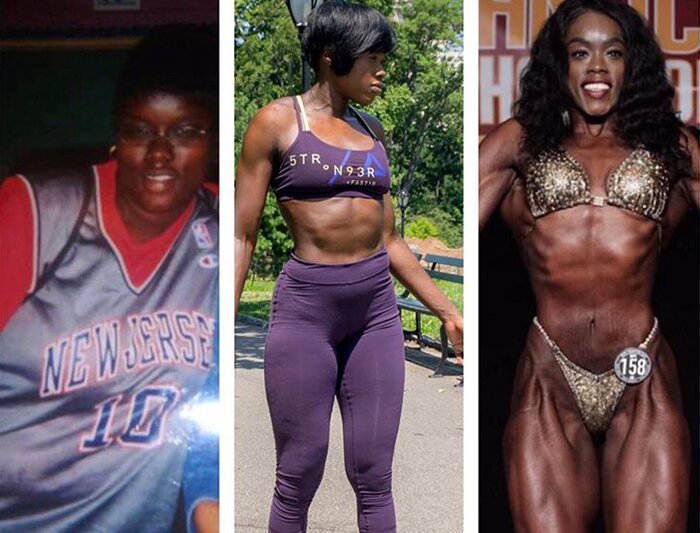 The Gym Became an Outlet for the Pain

When I first started working out, I was 250 pounds. At the gym, I felt like all eyes were on me. I felt like everybody was judging me. So I stopped going and fell right back into my old habits. That’s when I was diagnosed with diabetes. I didn’t want something like what happened to my mother to happen to me. The doctor said, “You have to get some control or it is going to get worse.”

I eventually realized no one at the gym was really judging me. It was just my own insecurities that I have with myself. So, I started to go to the gym again—and then I started going more.

I just fell in love with fitness. It became everything, every single day. It became an outlet for the pain that I had when my mother passed, for me to see my body transform in ways that I never thought possible.

Pretty soon, I began to like what I was seeing in the mirror. That’s when I started thinking about trying to help other people even though I wasn’t a personal trainer yet. I knew that I wanted to be a trainer eventually. I would just start with myself first.

While I was training, I started working on my personal training certification. Once I was studying the human body and learning how to lose weight, that’s when I really saw the pounds drop off. I started applying to different gyms to work as a trainer, but I was still over 200 pounds and I didn’t really get anywhere.

I had been working out at New York Sports Club while studying and preparing for my first bodybuilding competition. I used to go there for one hour in the morning, go back home and nap, and then come back for my second part of the workout.

The fitness manager always saw me come in, and one day he asked if I was a personal trainer. I said no, I’m not a trainer yet, but I’m working on my certification. He said, “Come back tomorrow.”

I came back the next day and he gave me a job! I was so surprised. I never knew that he was watching me. Turns out you never know who’s watching. I was overwhelmed with joy because my dream to become a personal trainer was coming true. Plus, the New York Sports Club is known worldwide. I was so honored. It was beautiful. 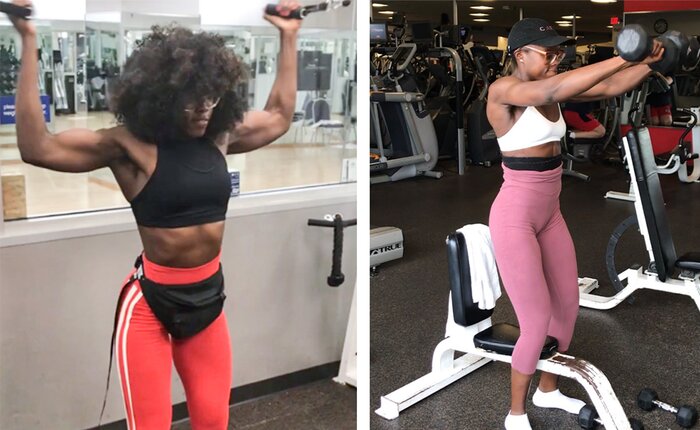 This is What You Came Here to Do

All this time, I was training for my first competition and working hard to stay focused. I knew that any little trigger could send me straight back to my old habits. The thought of stepping onstage was so scary! I have this fear of people judging me, but I wanted to compete because I wanted to prove to myself that I have discipline and can push my limits.

Yes, it was scary stepping on the stage. The judges were inspecting me, and a lot of things were going through my head. My mind went back to high school and all the teasing and negativity I endured. I actually froze for a couple of the poses. But I told myself, whether you come in dead last or come in first, you need to finish this—no ifs, ands, or buts. This is what you came here to do.

When I froze up onstage, I thought of those people who loved me and helped me along the way. I had to finish because a lot of people sacrificed for me. I had to do it. Not even for me—for them.

I finished my poses and walked off stage. I worked so, so hard for nine months, and even though I had setbacks, I didn’t quit. I was a little disappointed because in order to qualify for nationals and go pro you have to place top three and I didn’t quite make it. But I promised myself that I would next time. So right now, I’m training for my next show.

I’m an open book about my past, but it’s also scary to share what I’ve been through. I’m just so happy that I didn’t give up. I didn’t quit.

I Want Them to Know If I Could Do It, They Can Do It, Too

Today, I’m still training hard because fitness is everything to me. Whether I’m sad, mad, or happy, I’m going to go to the gym. Whether I get in a great workout or a crappy one, getting there is the first step.

I share my story to draw people in and help them open up. Once I’d lost all the weight, I posted my before and after pictures in the women’s bathroom. I did this so members could see my face and know that I’m a trainer who works here.

I’m not a therapist, but I went through exactly what a lot of people who come to the gym are going through. I know exactly how they are feeling. I want them to know if I could do it, they can do it, too. 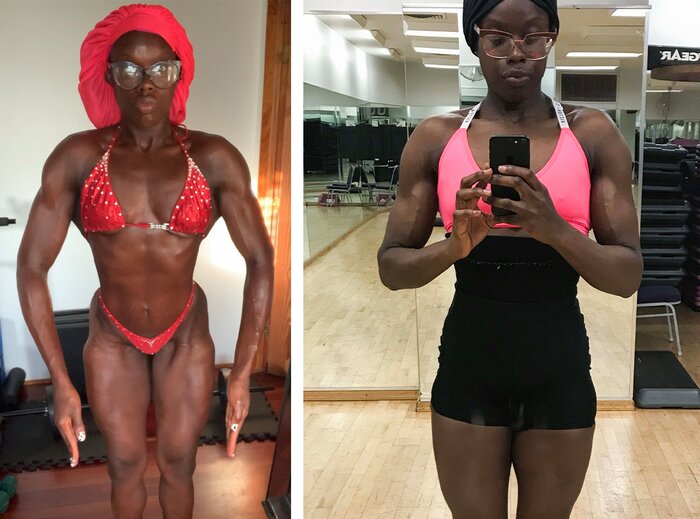 I know from experience how easy it is to rely on unhealthy coping mechanisms, like binge eating. Some issues will never go away, but you can always find a healthier outlet for those issues. I discovered that fitness can be an outlet. For me, working out and training hard was healing. It was like medicine—only better.

2. Focus on the Mental

What people don’t realize is it’s not even about going to the gym and working out. Changing your body or changing your life, it all starts inside your head. It’s mental: You have to want it for yourself or you’re not going to get anywhere. It is all a mind thing. And once you start loving yourself, you can overcome anything.

3. Learn How to Portion Control

It’s important to watch who you associate with. People’s vibes or their mood can definitely affect you. If you’re in a bad situation, or you’re surrounded by negativity, ask yourself what you need to do to change. If you don’t do something about those bad days or those bad situations, it’s just going to get worse. Take control of the situation and make a change.

One thing I did was never give up. Even if I thought, “I’m not going to make it,” I told myself it was just a thought. I have a lot of confidence now because of what I’ve made it through—more confidence than ever before. Instead of asking myself what’s the worst that could happen, I ask: What’s the best thing that could happen? It takes the fear and the doubt right out of it.

If you are struggling with an eating disorder, you are not alone. Please consider reaching out to someone for help and support.

If you want to share your success story with us to be considered for publication, send an email to​​​​ transformations@bodybuilding.com.