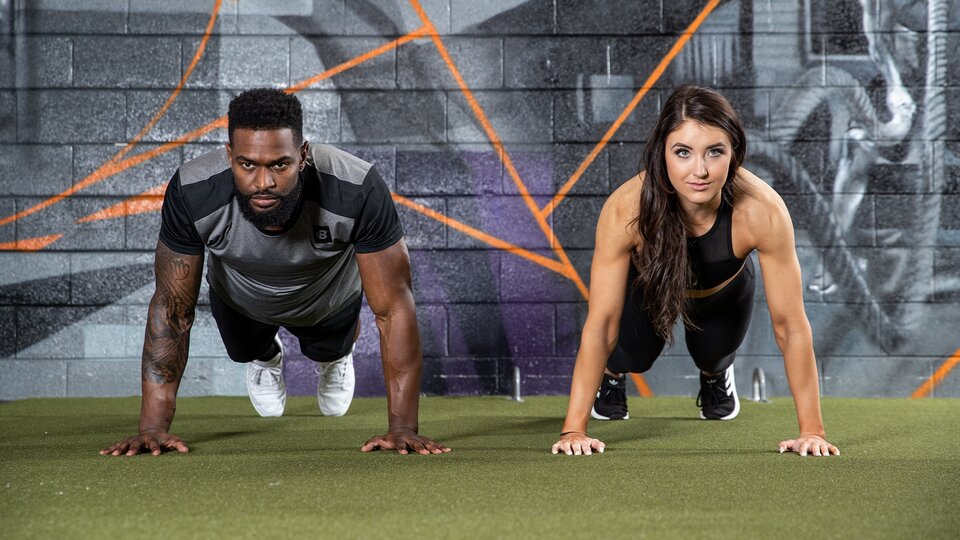 Despite what it might seem, I don’t think this common practice is dishonest or misleading. After all, even the best workout won’t do anyone any good if it’s not put into practice.

Publishers are merely try to reach out to their readers using goals they hear them expressing. Put another way, if exercise is medicine, then we’re much more likely to take our daily dose when it tastes good to us.

Plus, it’s not like gyms are actually packed with men and women doing the same solid workout, only calling it by different names. Instead, all this focus on labels like “toned” vs “strong” has led people to believe that they belong only in one part of a gym, or that another part is somehow off-limits to them. Men stampede toward the free weights, while women pack into the Pilates and yoga studios and line up on cardio machines.

The truth, as you might expect, is that we’d probably be best served by meeting somewhere in the middle. Both sides could benefit from some of what the other is doing, but there are a few things that both sides should keep in mind to help get the most out of their time in the gym.

Let’s break it down.

The trainer in me says it’s important for all of us—men and women—to exercise all of our muscles. However, the realist in me notices that two genders tend to focus their aesthetics-focused exercise in specific areas. Many men tend to work on their chest, arms, and shoulders, while women focus on their legs and shoulders.

There’s a difference, though. Most of the men I see are comfortable with training to gain at least some muscle mass, but many women unfortunately think they’ll get “bulky.” This is just plain silly, since women have roughly 100 times less testosterone than men. So allow me to speak to women for a moment. 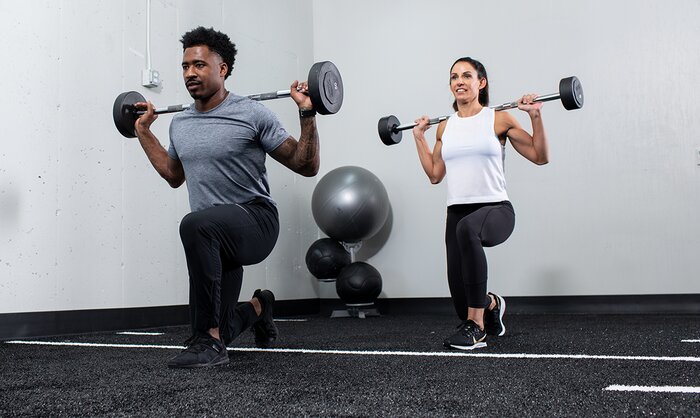 When you talk about “toning,” “enhancing,” or “shaping” certain areas of your body, what you’re really talking about is muscle. Muscle creates the shape of your body, and therefore more muscle equals more muscle tone. You can’t build a perkier, rounder, or sexier anything without building muscle.

o build that muscle, you need to stimulate muscle tissue, and that tiny pink dumbbell just isn’t the tool for the job. Instead, women often benefit from the type of heavy lifting that they’re more accustomed to seeing men do, says Dr. Cassandra Forsythe, co-author of The New Rules of Lifting for Women.

“In terms of lifting, [women’s] rep range is often in the 8-15 range,” Dr. Forsythe says. “However, many women would actually benefit from lower reps and more weight to hit muscle fibers that are only stimulated with those types of lifts.”

Women tend to be more quadriceps-dominant than men. This isn’t a bad thing; it’s just a question of anatomy. From a programming perspective, however, it means that unless she is training for a physique show or a sport that demands incredibly developed quads, the average woman probably doesn’t need to perform isolated quad-focused exercises like leg extensions on a regular basis. 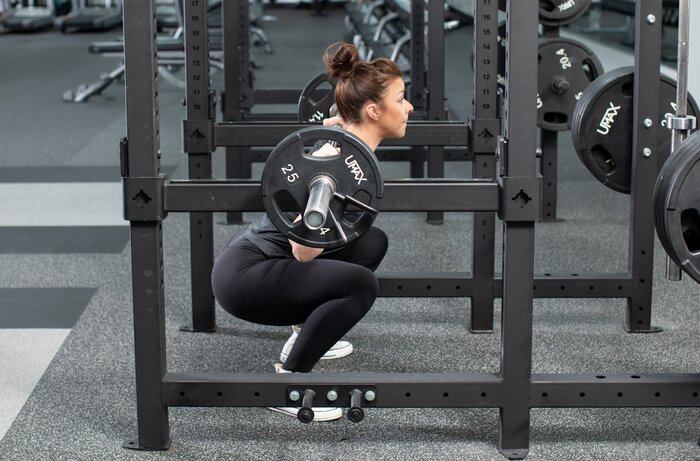 What’s the alternative? Limit your quad work to compound exercises like squats and lunges. If you’re going to focus additional work on a particular part of the leg, consider the hamstrings, in order to balance out that quad strength. Hamstring curls, good mornings, and deadlifts are all great exercises for women.

This applies to men, too. Don’t forget about those glutes, which aside from being great for attracting the ladies, are one of the clearest markers of a powerful athlete. In fact, most guys could benefit from some more dedicated lower body strength work. Don’t be that dude on the beach wearing jeans to hide your chicken legs.

Ladies: If you’re looking for a place to devote the energy you used to throw at the leg extension machine, Dr. Forsythe has a suggestion: Start pushing and pulling.

“It’s well known that most women carry much less lean mass in their upper bodies compared to men, so exercises such as push-ups and pull-ups are a common weakness,” she says. “It could be said that women should spend more time on these exercises than men, so they can increase their strength in their upper bodies, which in turn leads to improved self-esteem and a sexy upper body. What girl doesn’t feel amazing after doing full push-ups or pull-ups on her own?”

Men, on the other hand, are notorious for only paying attention to body parts they can see in the mirror, and pretty much ignoring everything else.

Sure, it’s great to build up your chest and biceps. But strengthening your mid-back muscles will give you better muscular balance, healthier shoulders, better posture, and a thicker, stronger physical appearance overall. 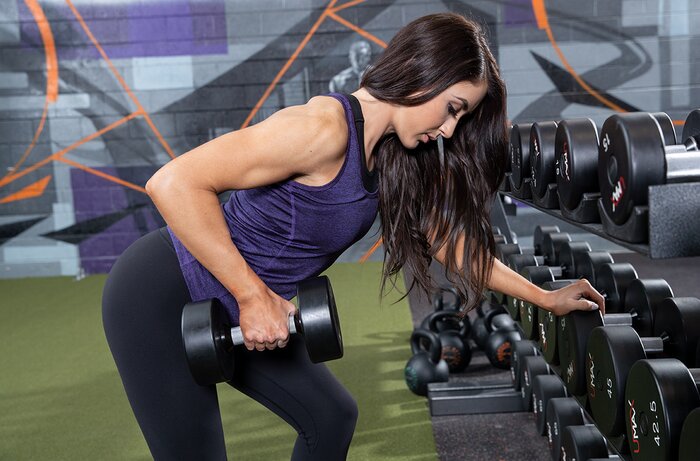 You’ve no doubt heard that men have “more muscle mass” or “are stronger” than women. This has a legitimate scientific basis, but people generally only end up misusing the idea in order either to make fools of themselves (in the case of men), or as an excuse (in the case of women). However, there is a way to use this information to our mutual benefit.

“Women do tend to be less powerful than men due to several factors, such as lower muscle mass, lower lung capacity and smaller hearts, leading to lower stroke volumes,” says Dr. Forsythe. “However, their ability to recover after high-intensity exercise is often greater than men’s. This means that women will often need less rest time after an exercise bout or set, and they can get back under the bar or back in the circuit sooner. So, exercise programs that prescribe significant rest periods may make a woman feel bored.”

This doesn’t mean that women should do necessarily more reps than men, but rather that they can often tolerate more exercises in a given workout. A typical guy could do well with longer, slower workouts where he throws all his effort into a single set and then rests, or supersets two strength exercises and then rests. His girlfriend, on the other hand, might see more benefit from doing sets of mini-circuits of 3-5 strength exercises.

Of course this might not be true for every man and woman, but it’s something to keep in mind when you structure your workout. Although men and women can and often do perform the exact same exercises, how we structure those exercises has a major influence on how much we enjoy our time in the gym. This can make the difference between fitness success and failure, because it’s no secret that we’re more likely to stick with something we enjoy.

There are plenty of men who do yoga, but let’s not kid ourselves into thinking it’s even close to an equal playing field. This is too bad, because yoga offers benefits that most men could definitely use. First and foremost, it can help improve joint range of motion in ways they’re not getting from heavy weight training. It’s great to be bigger and stronger, but it’s even better to be bigger, stronger, and more mobile. Plus, yoga is a great way to help recover from intense strength workouts. 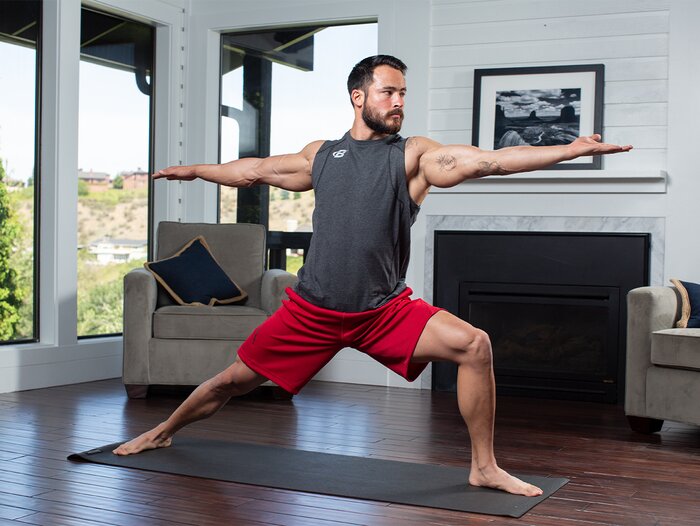 So why am I saying women should do less yoga? I’m not. I would just advise them not to ignore strength training, because the strength benefits from yoga are limited compared to what free weights, cables, and machines can offer. You can certainly get stronger doing yoga, but once you get past the beginner stage, the muscular challenge comes from harder poses, which tend to challenge your mobility more than overload any particular muscle groups. Plus, the slow nature of yoga can be complemented by doing shorter, more intense strength training sets. There’s no reason not to do both.

Also, be sure to evaluate why you do yoga. Many women have fallen victim to the idea that yoga will make give them “longer, leaner muscles.” Just to be clear, this is impossible. Here’s why:

If you do a quick Internet search for body-part specific exercises for the glutes, arms, chest, and shoulders, you’ll see many of those terms are commonly followed with “for women” or “for men.” This isn’t by accident. After all, many people are including those words in their searches.

The truth, however, is that there are no exercises for men or exercises for women. There are just exercises. We’re different sexes, but our bones, connective tissues, nerves, and muscles fibers are all made of the same raw material and function in more or less the same way. There’s nothing inherently male about a conventional deadlift, or female about a lying leg curl. They’re both effective hamstring exercises, and each has a certain use depending on your goals—not your gender.

Don’t be afraid of any particular machine or movement. The entire gym is open to you, so learn how to use it to your advantage.