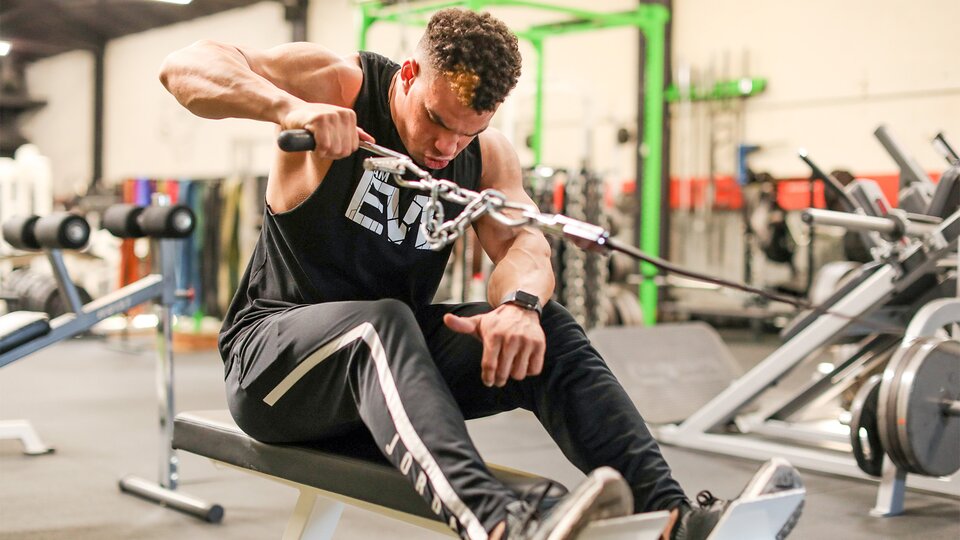 On any particular training day, you can go into the weight room with an exact plan in place. You know exactly how many sets of how many reps, with how much weight on each piece of equipment, you’re planning on taking you from “start” to “finish.”

Or you can go in with a basic idea and structure in place and craft the details of the workout while you train. This type of intuitive training is how IFBB pro Jeremy Dutra likes to lift, and he says it’s been a game-changer for building his physique.

“Pretty much every day, I don’t plan my workouts,” he says. “I have an idea of what I want to get done. When I walk into gym, first, I take a lap; I see who’s there, I see what’s available. Then, I design the workout as I go.”

No, this isn’t so-called “muscle confusion.” It’s more consistent and structured than that. Dutra’s approach gives his muscles just enough consistent stimulus to make predictable progress, and just enough variety to keep pushing them where they wouldn’t go if they weren’t forced.

If you’ve built a solid base with structured training, this could be just what you need.

Get a Pump Without Spending Time Planning

His approach to each section is the same:

“The best damn workout for you is the one that feels the best,” Dutra says. 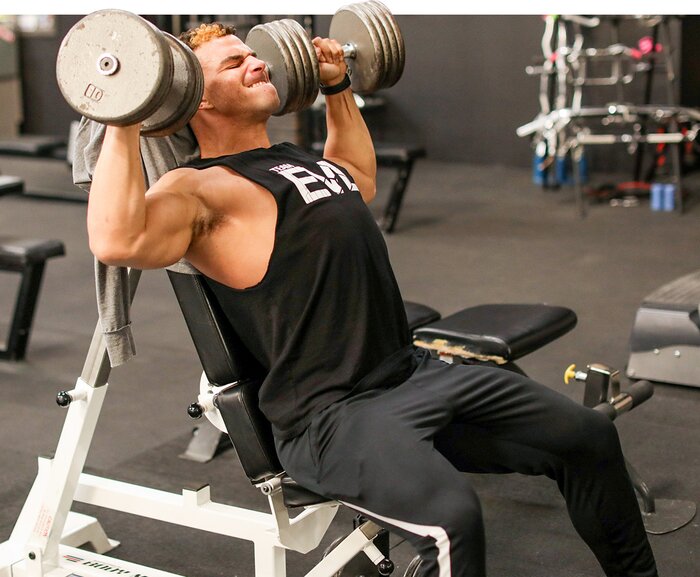 After 5 minutes of treadmill walking and a light warm-up of shoulder raise and face pull variations, Dutra likes to get his compound movements in first while he’s fresh and ready to go. His choice today is a high incline seated press, a classic way to maximally target the front delts while still engaging the rear and medial delts. But like all presses, it’s far more effective if you focus on controlling the negative on every rep and gradually work your way up in weight.

“I don’t know how many reps I did, but it doesn’t matter,” Dutra says after his second-to-last set. “I’m gonna go up, and then immediately dropset. So, I’m going to aim for around 8-10 reps—doesn’t really matter, it’s more of a feeling—then drop the weight and see if I can get about the same amount of reps with the lower weight.”

He ends up getting 7 reps with the heavy weight, followed by just 4 and a partial with the lighter weight. But he doesn’t beat himself up or struggle through reps with poor form. He just moves on. 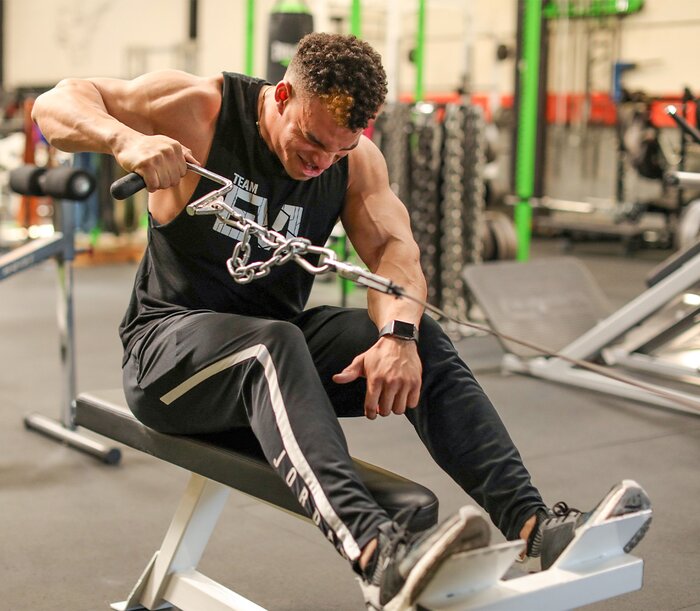 Dutra likes to follow his pressing with rear delt exercises because it is usually the weakest part of the shoulder complex—and of most lifters’ shoulders. Don’t be that guy who only trains what he can see in the mirror!

His biggest form tips when it comes to this unique movement is to maximize external rotation and keep the elbow relatively high. Both will dial in the tension right on the small rear head of the shoulder.

You’ll be surprised how strenuous a single-arm cable row targeting a small muscle can be when done correctly. Dutra’s friendly reminder to you for when this starts to happen: “When your body wants to stop, you gotta tell your mind that’s when the real work starts.” Add alternating dropsets for fun, if you dare. 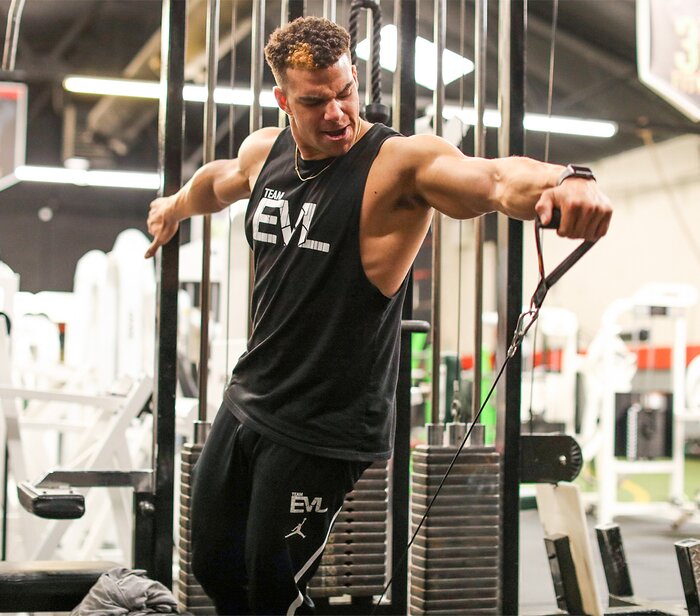 Dutra reached for the cables for this exercise because of the constant tension it provides. Plus, by holding onto a post, he could perform them starting from behind his body for an extended stretch.

As you raise the cable, lean away from the tower, keep your wrist lose, and think about pushing the back of your hand toward the wall. As always, squeeze at the top and control the negative. The name of the game here is time under tension.

Dropsets are an option after your last set, but not the only option. Wanna get those shoulders feeling extra spicy? Do a few partial reps instead. 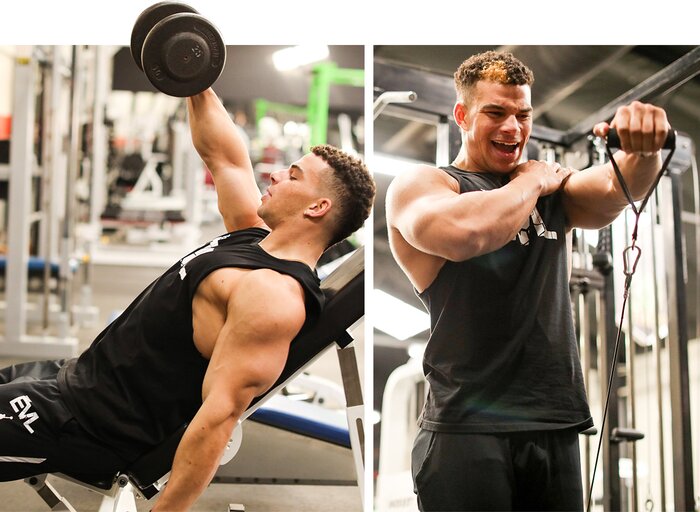 For this first exercise, set your bench at a 45-degree angle. Your goal here is a stretch in the delts, starting with your arms directly under your shoulders and holding the dumbbells with your palms facing down.

Perform the front raise in an alternating manner, contracting all the way up until your arm hits a 45-degree angle. Dutra utilizes a full grip rather than a false grip to minimize the risk of dropping the weight on his body, then performs partials when full range of motion isn’t possible anymore.

Once you’re done with the dumbbells, the real fun begins. At the pully station, stand with the handle positioned behind your body—again, for that added range of motion—and face away from a low pulley.

Raise your hand straight up until it’s level with your face, feeling the hard contraction in your front delt.

Dutra recommends starting with whatever weight you were using on dumbbells. Expect to be surprised at how easy it is! Switching to cables allows you to continue working the muscle, even after you’ve done all you can to failure with dumbbells. 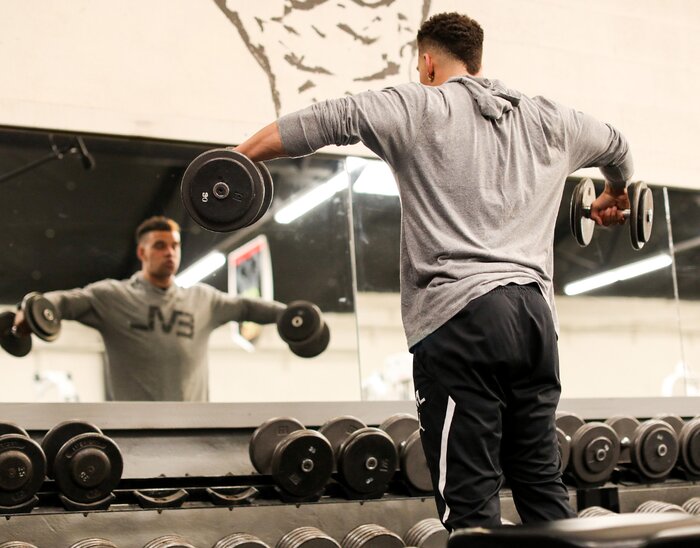 If you watched Jeremy’s “Best Damn Arm Workout,” you know he doesn’t think any workout is complete without a ridiculous finisher to make you question your decisions.

“I just want to know that when I walk out those doors, I did everything I could to develop that muscle the most,” he says.

Grab a pair of light dumbbells to perform following exercises:

Love shoulder dropsets, supersets, and finishers? Then brave Abel Albonetti’s 30-Day Shoulders. This just might be the toughest shoulder-building program on the planet.