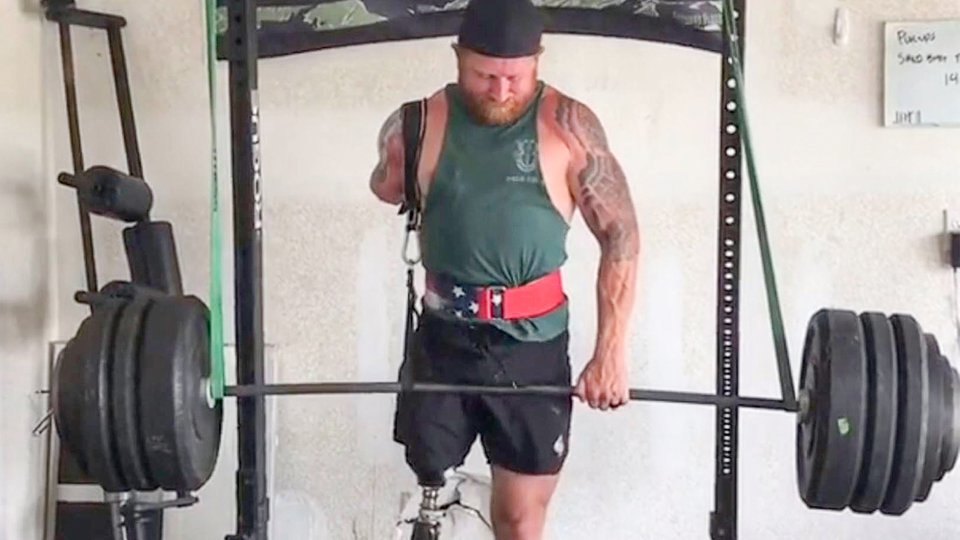 On Nov. 13, 2013, while on his fifth tour of duty as a U.S. Army Green Beret, Sergeant First Class Jared Bullock’s vehicle ran over an improvised explosive device (IED) in Afghanistan. Bullock was thrown almost 300 feet by the blast. His best friend, Staff Sgt. Richard L. Vazquez, was killed, and another team member, Staff Sgt. Alex A. Viola, died days later in the hospital.

As Bullock recalls: One minute he was driving the vehicle, the next, he was waking up in an Army hospital in Germany, missing an arm and a leg.

The incident put an end to one chapter in this active, athletic soldier’s life. But he quickly started another one, built around pushing the limits of what he could achieve—and ultimately, giving back to a new generation of athletes and veterans.

Given the gravity of his injuries, Bullock’s recovery wasn’t a straight line. He has been through over two dozen surgeries to date. But as soon as his recovery allowed, he was back in the gym and researching ways that athletes with missing or prosthetic limbs create solutions to fit their situations—and achieve ambitious physical goals.

He had never been a competitive runner before, but vowed to himself that he would run an obstacle course within the next year. Remarkably, 10 months later, he did it, at a Tough Mudder. He has since completed a dozen more obstacle courses, mud runs, and Spartan races. 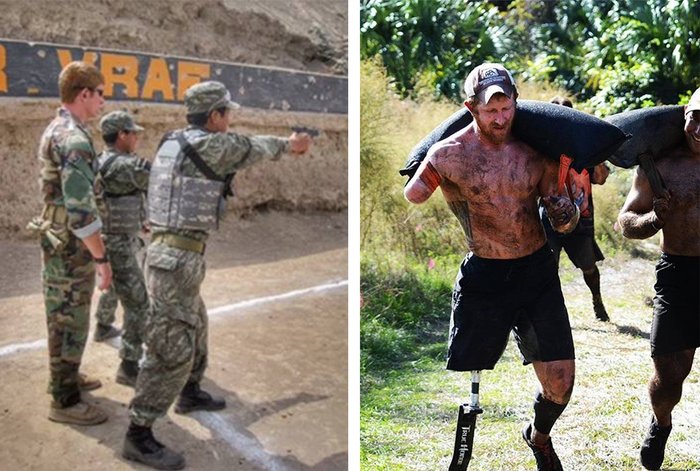 Bullock also began to focus on rebuilding his muscle and strength, both of which had been drained by recovery. His trainers kept telling him to build up his strong side and not worry so much about his injured side, but he was insistent on training both sides, even if he had to train them unilaterally.

“I was doing my own research on how to train without all of your limbs,” he says. ”At the same time, I was working with child amputees here in the United States and kept seeing how the asymmetrical strength they were developing would cause them problems. I didn’t want that to happen, so I spent a lot of time in my gym working my whole body.”

He found that his body welcomed the strengthening stimulus and he could actually build significant muscle—if he could eat enough calories.

“I’ve always had a fast metabolism, but now, as an amputee, I burn calories like crazy,” he says. ”My robot leg weighs 10 pounds. Dragging that around takes twice as much energy as it would to walk around with a regular leg. I burn through so many calories that I have to eat about 4,500 calories per day.”

In 2016, Bullock took the next step in his journey—onto the stage at a bodybuilding competition, where he took fifth and was a clear crowd favorite. 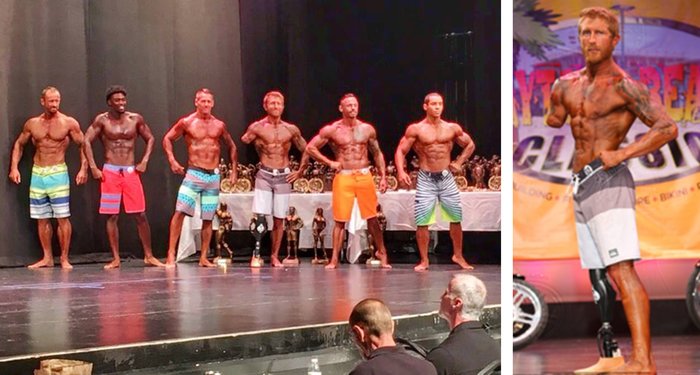 Bullock says he started out copying the exercises a couple other adaptive athletes posted on Instagram. Then he just started looking at body movement as a physics problem.

“You need tension,” he says. ”You’ve got to have certain angles. I just played with those on machines and using straps looped over a barbell for moves like deadlifts. I figured out how I wanted to do it as I went along.”

However, not everything Bullock did in the gym involved that level of complexity. Sometimes, the answer was as simple as using a familiar tool in a different way.

“For example, I did legs on the calf machine that I use for four different exercises,” he explained. ”I set it up so I could do 6 reps of step-ups at about 200 pounds. Then I did 3 ’finisher‘ sets at 15-20 reps with a lighter weight to pump in some more blood. For legs, I’ll do heavy single-leg Romanian deadlifts, then I’ll finish off with leg extensions and hamstring curls.”

There isn’t much of Bullock’s right leg left—a mere 9 inches. Even so, he’s able to train it using a very low platform to do step-ups. He also does sled walks both front-facing and sideways, and plenty of loaded walking, often carrying a loaded safety squat bar. 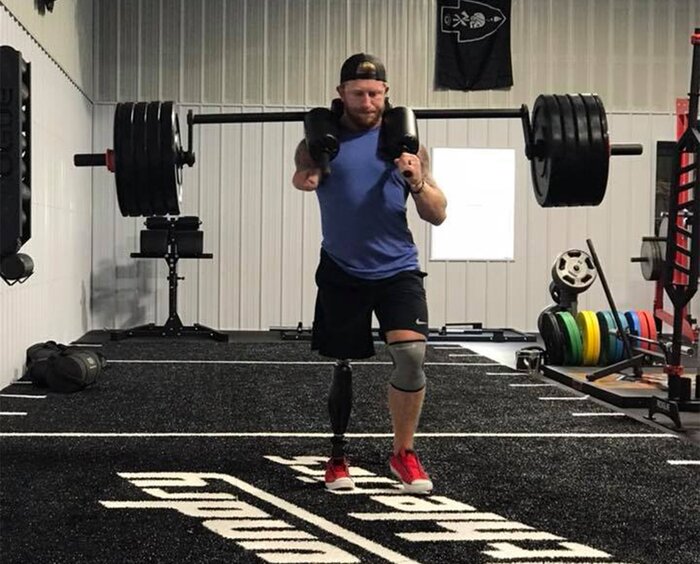 A Different Kind of Retirement

Bullock retired from the Army in 2015. But after all he’d been through and accomplished, the veteran says that he found retired life didn’t quite suit him—even in his specially-designed smart house built for him by the Gary Sinise Foundation.

“It was hard to be just 32 and not have anything going on,” he recalls. ”You can watch everything on Netflix, but then there’s only so much to do with your free time.”

Bullock took his athletic energy and expressed it in a new way, opening a gym in Carterville, Illinois, with a steady clientele of young athletes and a few veterans and local National Guard members. Foundry Athletics is outfitted to the hilt with elite equipment by Arsenal Strength, the equipment partner of Bodybuilding.com’s Lift Life Foundation. But this cutting-edge training center still reflects Bullock’s history with its motto: ”Strength through adversity.”

“I love working out, and I wanted to bring something back to where we were moving to in Illinois, serving people who truly want to lift,” he says. ”Working with younger athletes really gets me excited. And helping them get where they need to be really helps me.” 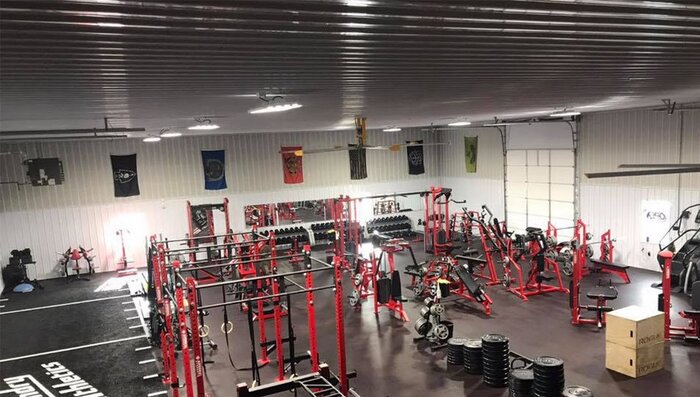 Not as Hardcore, But with New Purpose

Now 5 years away from the bodybuilding stage, Bullock has happily settled into a more low-key approach to fitness. He says he lifts like clockwork around three days a week, ”not as hardcore as I used to,” but with the goal of being a better father and coach.

“The ability to do stuff with my son, or with the daughter we’re about to have, that’s the biggest thing for me,” he says. ”Can I get out there? Can I throw BP and not be confined to the sidelines? It’s more about being active so I can aid in their development and be on that path.” 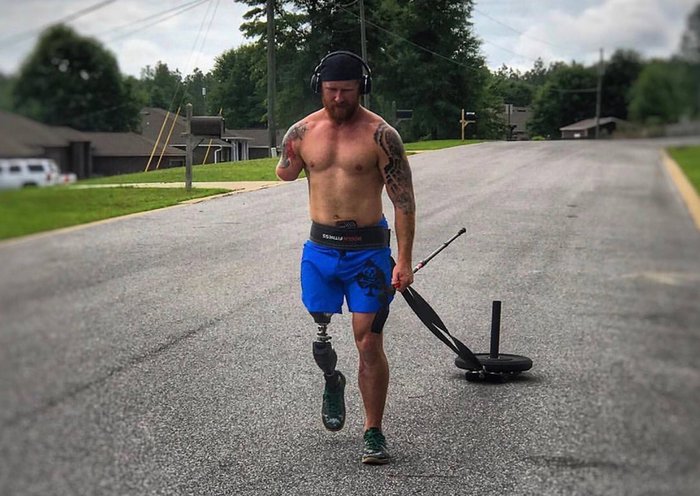 For half a decade, this wounded veteran was focused on pushing the limits of what could be done with just one arm and leg. Today, he’s embracing a quieter life—the kind the rest of us take for granted while active-duty warriors protect our freedoms abroad. That may be why on Memorial Day, while many other gyms perform the Murph workout as a fitness ritual, Bullock says you won’t find him in the weight room.

“We take the day off from training to do our own personal reflections,” he says. ”I don’t say that to take away from what everyone else does. I just don’t want to do anything on that day. I’ll have a glass of whiskey and think about the good times. That’s about it. I just want to think about what was.”